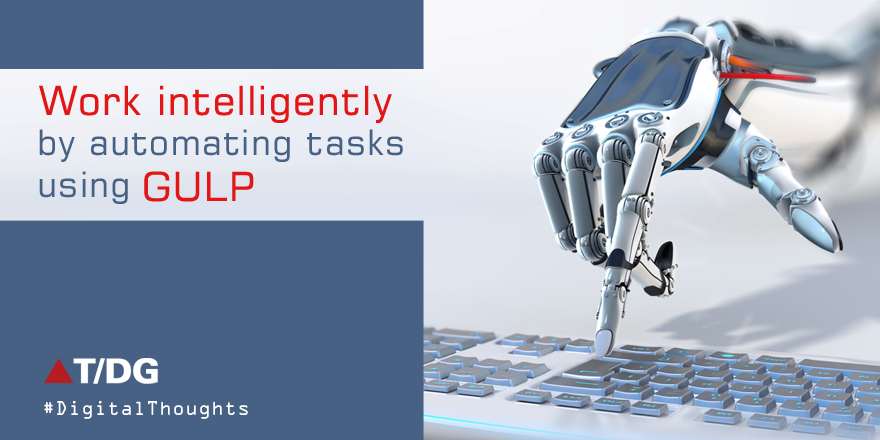 Gulp is a tool for task automation. Gulp helps in many automated tasks like parsing, watching files for changes, refreshing, bundling and minification, executing tests before build, checking against jslint, csslint and many more. Follow these links for a brief introduction to Gulp.

We will be using Gulp in this application only for Parsing, Watching and Refreshing.

You can get the app from below link Sample App

The folder structure is a very important factor to consider when using Gulp. There may be many resources like - .ts,. scc files that our browser doesn’t understand. Browser understands files like js, css, html. But we need to use many such extensions in our app. Gulp comes very helpful when dealing with such situations. Gulp parses those files and organizes our folder automatically according to the configuration set up in gulpfile.js.

We need a folder named assets where all other files that the browser doesn’t understand are placed. Then, we will have a folder called app where we will have all the files that the browser understands. Then the files from the assets folder are parsed and organized in the app folder specified in gulfile.js. The app folder will be executed in the dev environment.

The folder structure doesn’t require to be the same as this but it should be organized in a manner that distinguishes app files easily. 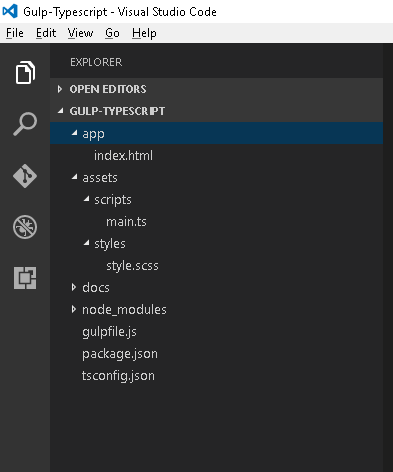 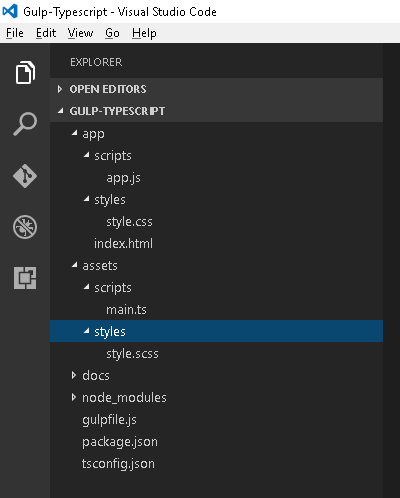 A new file and folder is created in the app folder:

Parsing: In this app, we have two types of file extensions: typescript and sass. These files need to be converted into javascript and css files respectively.

Script Parsing: In gulpfile.js, install the required dependency for Gulp and typescript files.

Create a file tsconfig.js in the root folder as shown in the image above. This is the config file or the typescript.

In gulpfile.js, we imported these modules

To check the task, run the following command on command prompt

In gulpfile.js, install the required dependency for gulp and typescript files.

Import these modules in gulpfile.js

To check the task run the following command on command prompt

Build Both the Tasks Together:

It will execute both the tasks simultaneously. Both typescript and sass are tasks dependent on build. The build task is executed only when the dependent tasks are finished. A single build task with all other dependent tasks helps to have a single point to build the whole app.

It will load the app with the browsersyn config after building the app.

To know more about browsersync, read the below link:

The app is served from the app folder as configured in the config section of serve task of gulpfile.js. It loads the app/index.html file.

Create a task which will build the app, load the app and watch all the files for any changes.

gulp.watch is watching files for any changes and executes the tasks mentioned in the array.

is watching for style.scss file for changes and executes the task sass whenever any change is made on this file.

The sass task is having browserSync.reload method which will refresh the browser whenever this task is executed.

The same process is used for main.ts and app/index.html file for changes and refreshing

In this app, the Gulp is used for a very simple and important process of parsing, watching and refreshing the app. Although the example is very basic, the approach could be used for other real-world applications.