Give the Voice Search Ability to Your App to Provide Ultimate User Experience. Know Why and How (Tutorial) 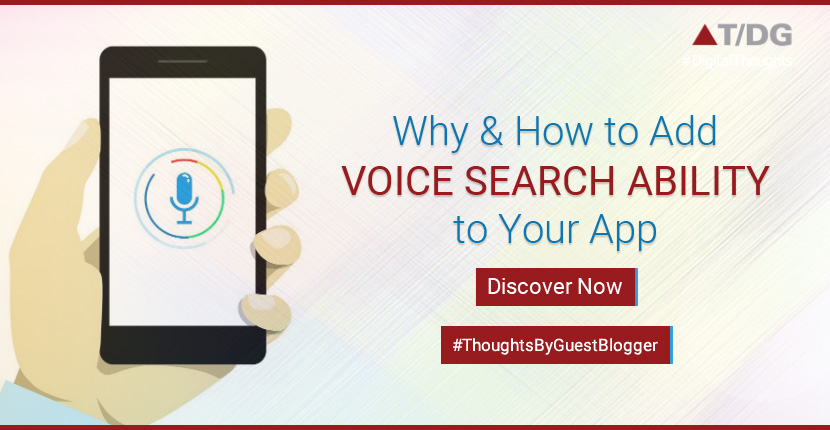 It matters how users use your app. Giving more ways to operate your apps will somehow increase the user’s satisfaction ratio. Users want a painless operation of an app during driving, eating and workout. Before 3 to 4 years, voice search was considered a totally non-implementable technology, but in recent years, voice search is present in all kind technology. Nowadays, any feature-packed app, wearable devices, and even IoT devices are hard to imagine without the voice command compatibility.
However, not mobile apps, but smart speakers like the Amazon Echo and Google Home, occupy the highest, almost 95% of the user share, when it comes to providing the access to voice search. Still, when the future scope of voice search has already been predicted to be big, so many Android apps don’t even bother to have voice search compatibility. According to marketing guru Neil Patel, if your app or web hasn’t been optimized with the voice search technology, you are still yet to catch up to the market trends. Apart from this, if we think economically, then the data from the survey conducted in April 218 shows that 58% of the US customers have used voice search to find local businesses.
Voice search enabled app has more potential to remain installed in a user’s phone for a longer time, and it’s one of the most popular features in mobile app development right now. Typing is the only form of digital communication, this legacy of mobile app development has now become past. Voice search enabled apps are taking the world by storm. If you haven’t added this applicable feature into your app, know the reasons why you should do it now.

Why Give Voice Command Ability to your App?
The following are the key reasons your app needs the Voice Command ability.
1] User’s Need
We have discussed that a voice search enabled app lets users to use the app in a very easy way. Understand the fact that users are always engaged in doing something. If they get irritated to use your app, you will straightway lose users. Users want a seamless experience while using the app. Thus, big brands like Starbucks and Domino’s have added voice command feature in their app to order food.
2] Increase the Speed of the App
People hate when your app takes time to load or takes time to turn the pages. According to Google data, if an app takes more than 3 seconds to load, users decide to abandon the process. Thus, it is very important for you to make sure your users will get a seamless app experience. With the voice command, the app can work 0.54 second faster.
3] Your App can Work with Google Assistance
Adding voice compatibility to your app means you bring your app under the boundaries of Google assistance and other voice-enabled speakers. In this way, the app will act on a command even if the command has been given on Google assistance.
Here are some statistics to help you get a better idea.

How to add Voice Technology to the Mobile App?
Before going further, please understand that you are developing an Android app, using Google’s API, which means Google is the development platform and Google assistance is a technology platform, based on which your app will run. Any app which will have voice technology must have integration with Google Assistance. In a broader term, an app can use voice technology for Google assistance in two ways.
Now let’s understand two very important components of integrating the app with Google assistance.
Now that we have understood a few initial concepts, let’s move ahead and start with a few more concepts. In this blog, I will give the example of how you can add voice search in your app which acts when users give a command with the name of your app. So this is an explicit approach.
<activity android: name = “SearchActivity”>
<intent-filter>
<action android : name =”com.google.android.gms.actions.SEARCH_ACTION”>
<category android: name = ”android.intent. category.DEFAULT”/>
</intent-filter>
</activity>

This code has to be written in the AndroidManifest file.
Intent Intent = GetIntent();
If (SearchIntents.ACTION_SEARCH.equals(intent.getAction()))
{
String Query = intent.getStringExtra (SearchManager.QUERY);
Domysearch(query);
}
}

In this code, there is one more GetAction intent which has the voice command of the users in the form of text. This command compares with the search intent and shows the result with the search manager.
Here is the list of few inbuilt intents of Android.

Bringing your mobile app under voice command technology is a very easy task. By writing a few lines of code during the mobile app development process, one can easily integrate the app with Google assistance. By doing so, an app owner will get so many economic benefits. In this blog, we have learnt a tutorial of a simple process, but there are many more things you can do with your app. Since voice search is becoming a popular way to search, you have to add voice technologies in your apps to dominate your competitors.