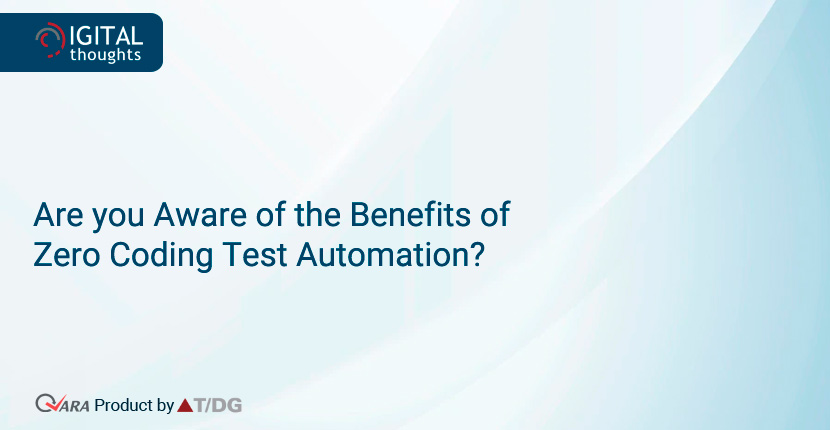 Do you know what is zero coding test automation? Platforms with zero coding test automation are trendy right now! This group of strong zero coding test automation platforms has grown in popularity as a result of the fact that one may now automate with little to no programming experience! Thus, the number of software developers and test automation engineers is growing in the modern world. These tools are simple to use, increase development speed, provide agility, and hasten the process of determining the final product's commercial worth.

The business logic and functional characteristics of the product, which are very essential to customers, might be the focus of QA engineers.

When the emphasis switches from code to business logic early in the software development cycle, many significant problems are found. A zero-coding test automation solution aids QA testers in focusing on test techniques rather than programming.

QA test automation developers may easily create tests using no-code test automation solutions. The amount of work needed to automate the full test suite is decreased as a result. The main building blocks of test scripts in codeless test automation systems are straightforward unit test methods. Additionally, it makes it easier to maintain test suites. These tools may ultimately result in time, money, and effort savings for both the client and the software development business.

Because they are more visible and straightforward when it comes to building tests, zero-coding test automation technologies have emerged as the perfect platform for enticing those new to the test automation industry.

Coding platforms used to terrify people since it was necessary for them to learn programming languages. Because of these tools, they no longer need to worry. The zero coding test automation platforms have finally closed the technical skill gap by empowering more of their staff to automate.

You may monitor your test coverage using these tools. If there are any coverage gaps, tests may be identified and constructed or built-in accordance with the scenario.

A variety of testing techniques, such as UI, API, load testing, synthetic monitoring, and others, are available with zero code platform test tools. It's easy to get test automation up and running.

Guidance on selecting a platform for zero code automation:

Here are a few helpful hints to assist you in selecting among the several zero-coding systems on the market:

Do you wish to increase the output of your QA team? The answer you've been seeking is QARA Enterprise, a test automation tool that requires zero coding from The Digital Group. You stand to gain a number of advantages, including a shorter learning curve, reduced reliance on subject matter experts, increased productivity, and smaller testing teams using the Zero Coding test automation framework of QARA Enterprise.

Want to see why your QA team should use the QARA Enterprise as the best zero-coding testing platform to conduct test automation with ease? Our staff will contact you if you go to www.qaratest.com, contact us, or send an email to info@qaratest.com.