5 Things You Should Know about IoT Testing 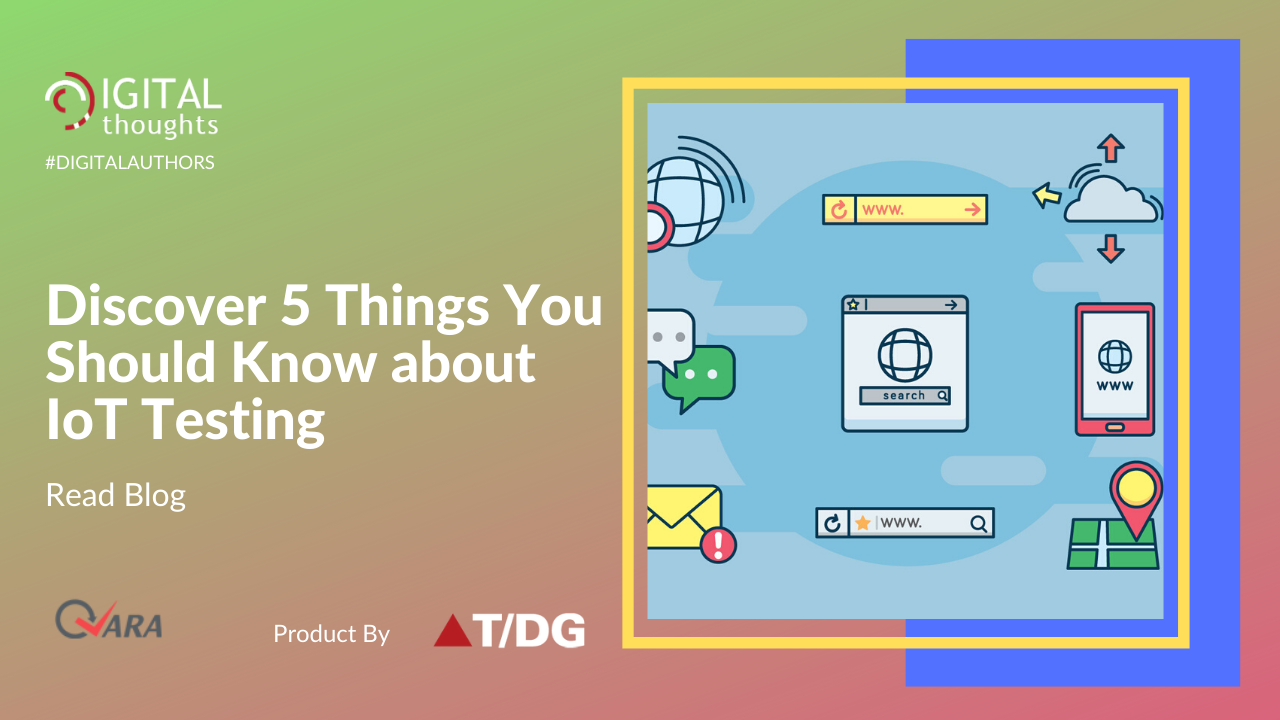 The Internet of Things (IoT) is a term used for a system of computing devices that are inter-connected with one another, whereby each device has a unique identifier (UID) and each device has the capability to transfer data over a network without the need for human interference. There are countless applications of IoT technology, and we are already witnessing this technology at work in the form of "smart homes" where all the devices and appliances within the home can be accurately controlled from a remote location using smartphones or other smart devices.
IoT can also be defined as a network of smart devices that are interconnected and exchange large amounts of data and also upload the data to the Cloud. Since the future is all about smart products and devices, there is the need for advanced testing platforms for the QA of IoT devices. Now that we are aware of what IoT is all about, let us discover 5 things you should know about testing of IoT devices.
1] Types of Testing in IoT
While most major testing types apply for and hold true for IoT testing, there are few testing types that hold more significance over the others, and they are as follows:
a] Security testing
Since the IoT environment involves exchange of large volumes of data between devices, security is one of the primary concerns. This makes security testing an integral part of IoT testing, to detect vulnerabilities and prevent unauthorised access to personal or sensitive data.
b] Usability testing
There is a wide range of smart devices out there, ranging from smartphones to home assistants to wearable gadgets. This factor of variability creates the need for usability testing to ensure the users get the best out of every device.
c] Performance testing
When the network of IoT devices is dependent on the performance of every interconnected device, performance testing becomes mandatory. After all, it is all about eliminating the need for human intervention, which calls for high performance devices.
d] Compatibility testing
When we are talking about a network where the devices are connected to one another, compatibility becomes the primary concern. Unless the devices are compatible with each other, purpose of the network will never be fulfilled.
2] IoT Testing Process
The IoT testing process consists of the following broad categories:
3] Challenges of IoT Testing
The following are the key challenges that face during IoT testing:
4] Best Approach for IoT Testing
While there is no set of standard best practices that apply to all IoT devices, because of the sheer variety of devices used, IoT testing calls for test automation. This is because the large volumes of testing can never be accomplished with manual testing alone. Also, automation testing eliminates errors in the QA process and helps the QA team achieve greater test coverage in less time and offers multiple benefits.
5] The Right Tool for IoT Testing
As mentioned above, IoT testing requires an advanced Automation Testing tool that has the capability to support accelerated testing. The following are the key features of an ideal tool for IoT testing:
QARA Enterprise is a suite of products for complete test management and functional test automation that enables users with minimal programming skills to design, automate, and run functional tests over web, desktop and mobile applications. It’s advanced test automation capabilities make it the ideal tool for IoT testing.
That was about the key things one should know about IoT testing. IoT is the future and enterprises are waking up to the need for implementation of IoT testing as a part of their QA process.
Follow
automation testing, iot, IoT testing, QA, quality assurance, trends